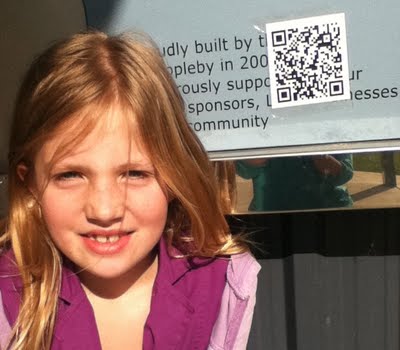 Today in class I introduced my class of Year Fours to QR codes.

I had used http://www.classtools.net/QR/create.php to create the codes in the first place. It prints off the QR Codes and questions for you in one click. I confused myself a little with the trail as I put them out so next time I would be careful to number the codes on the back because they all look the same. I checked that the trail was working at morning tea while I was on duty to make sure that I had got it right.

I talked with the class about what a QR code was and how they may be useful. They recognised them from a recent ad in the paper from a Fudge Company opening where if you scanned the code you got a free cupcake. I was surprised how many had noticed it and wondered more about it.

I showed them how to scan a code and then set the task of following a treasure trail, being timed as they go.

Each QR code site required the children to take a photo as proof that they had got to the correct waypoint along the way. They already knew how to take photos with my iPod Touch so that part of things was simple. One bright spark suggested that all they had to do was look in the photos app on the iPod Touch to see where the previous group had gone to know where the treasure code was!!! We discussed how this would spoil the fun so garnered an agreement that this wouldn’t be fair.

I then set the children off, three at a time to follow the trail with me timing them with my iPhone. The groups then thundered around the school grounds following the trail. They really enjoyed the activity, being outside, problem solving, working co-operatively, taking photos, being timed and generally enjoying themselves.

When the whole class had completed the activity we had a debrief, did a little shared writing on our class blog and an announced of the winning team! All good fun.

My next step is to think of something using QR Codes that has a little more educational rigour to it.