Yesterday I had the privilege to meet a group of people, mainly mothers of young children with neuro-developmental delays who were helping their children communicate with iPads. I was inspired by their interest and by the innovative ways they were using their iPads.

The session was lead by Bianca and her young son, Kaiden, made an appearance via video. This video shows the progress that Kaiden has made in three months since he got his iPad. Awesome.

Kaiden has had his iPad for 3 months. Here is how far he has come! I had been trying for nearly a year to teach him to use his pointing finger and it took about 6 weeks with the iPad – AMAZING! The apps he is using are…. Peekaboo Barn, Peekaboo Ocean, Baby Touch, Sparkabilities 2, Choiceboard Maker (now upgraded and called Choiceboard Creator).

For those new to my blog all of my posts that share my learning with iPads can be found under the iOS tab by clicking here.

Also take a moment to watch this inspirational video of how Bianca, Kaiden and his physiotherapist work together using the iPad as a motivator. Well done Kaiden.

Bianca listed the apps she uses with Kaiden on a piece of paper. To make it easier for people to find those apps I am basically re-creating them here with hyperlinks to make the accessing of them easier.

In most browsers when you click on the link it will ask you if want to open iTunes- you say yes and it takes you directly to iTunes where you can download the app.

There is a great Facebook page called Babies with iPads which has a thriving community of people sharing apps and posting videos of their progress using apps to support learning. And this one Apps for Children with Special Needs has lots of apps demos which are great to look at to see if an app is right for your child before deciding whether to spend money on buying it.

Apps for Communicating between Home and School

Each child has an iPad that is theirs. We can capitalise on the communication between parents, whanau, school, teacher aides, teachers but writing (and emailing) quick Notes from the Notes app telling of progress.

Use the camera for stills or video to capture those wonderful moments when breakthroughs are made- share with parents who aren’t able to be there.

Simple Touch- Cause and Effect Apps

Slightly more complex apps but not too tricky

These can be powerful to record stories around what you did together and to remember and play back and share special moments.

Choosing the right one for your child may be a bit of a mission but looking at previews and demos on the app developer’s website and YouTube maybe useful. 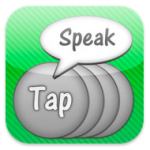 TapSpeak Choice ($199.99) This one is expensive but it’s what Bianca chose that seemed to be the best choice for Kaiden

Thank you Bianca for sharing a snapshot of your journey with Kaiden with us. I hope this post will be useful for others with pre-schoolers and children with special needs using their iPad to play and learn.