Everyone is talking about the SAMR model for eLearning.

A principal emailed me this week wanting to know more about the concept so I emailed her with a reply but thought it may be useful to add my thoughts more publicly too.

The SAMR model is based on the thinkings of Ruben Puentedura.

In a nutshell here is how I see what the SAMR letters stand for.

S– Substitution– would be you just used an iPad as a flash sort of text book for the kids to read and copy from.

A– Augmentation– you might have the text book read to you via Speech Selection so that is moving things up a notch.

M– Modification– You might make your own book using Book Creator that includes graphics, audio, video and hyperlinks etc

R– Redefinition– You might have students all collaborating making pages for a Book Creator including graphics, audio, video and hyperlinks etc and combining them in one book which you then publish it on iTunes.

I made this graphic using Explain Everything app to show the levels of SAMR. 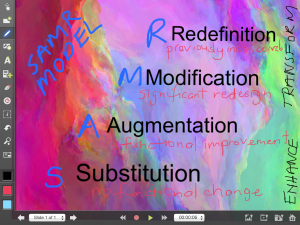 I think that the iPad can be an excellent vehicle to raise our game around learning but I am concerned that some teachers think that if they had enough iPads, or Chromebooks, or laptops or whatever, then they would be better teachers and the children better learners. Unfortunately it doesn’t happen like that.

I have seen some people place different iPad apps on a dimension of the SAMR model as though there they sit, fixed, but I would beg to differ.

Take for example the free app Tellagami for iPad, iPod Touch and iPhone. At its most basic level it is an avatar maker- you can change the look and features of a male or female avatar and take a screen grab! Easy enough but let’s put it on the SAMR model.

S– Substitution– You make an avatar, take a screen grab to use as a prompt for writing in writing time. 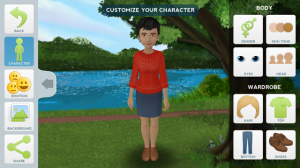 A– Augmentation- You could create an avatar, upload a background image then write or record a script for it to describe a classroom happening, a visual mihi, or whatever as in this intro I made for an upcoming iPad workshop. Or a learner could take a photo of their artwork and their avatar could talk about how it was made and a self reflection on the process.

Launching Learning with an iPad from Allanah King on Vimeo.

M– Modification– You could combine the learners’ short projects into one segmented movie using iMovie. This example by Greg Swanson, ADE from Australia, shows this idea really well. His students each produced a segment for the instructional video to show evidence of learning.

R– Redefinition– You might invite others, not from your school, or region or country to each make their own segment, then collaborate to make and share their Tellagami projects. The end result being a collaborative video like Paul Hamilton, another Australian ADE has done with this project.

So what I am saying here is try to think of and use apps that allow learners to create, engage,connect and collaborate. Aim for the Redefinition end of the SAMR model- don’t limit yourself to the mere Substitution dimension.

I would love to hear your thoughts and examples and thoughts on using the SAMR model in your classroom with your students.

14 thoughts on “How I see the SAMR Model”