A couple of days ago Chris Harte, who was in my group at the Google Academy last year, posted on Google Plus about an Add On to Google Docs ‘Easy Accents‘ that allowed writers to easily use accents when writing.

As I often do I emailed myself the link so I could look at it more when I had a moment.

This afternoon I had a moment.

Dan Baker had originally posted that he had updated the app but sadly the accents didn’t include Māori macrons, only French, German and Spanish. I took it upon myself to ask Daniel if there was a possibility of adding Māori. Dan lives in Missouri and the time zones must be compatible with a Sunday afternoon in New Zealand so there followed a quick flurry of emails and a shared Google doc and within the hour the job was done and being pushed out to Google servers globally. 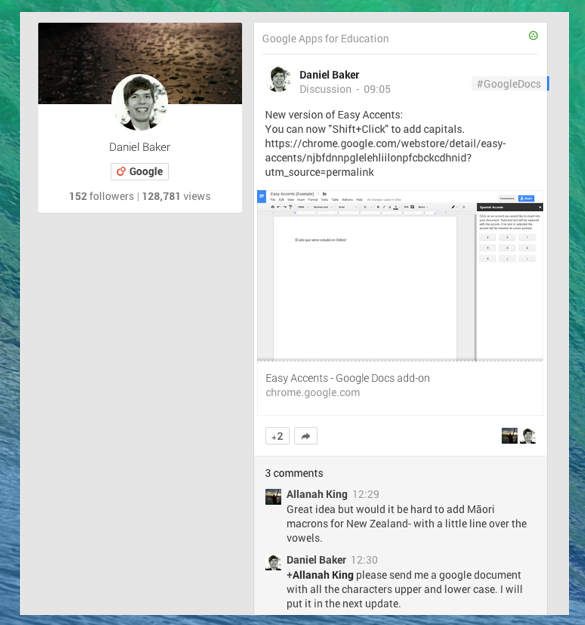 So now go to a Google Doc- ADD ONS- get add ons and look for ‘Easy Accents’ or click here directly to add it to Chrome. 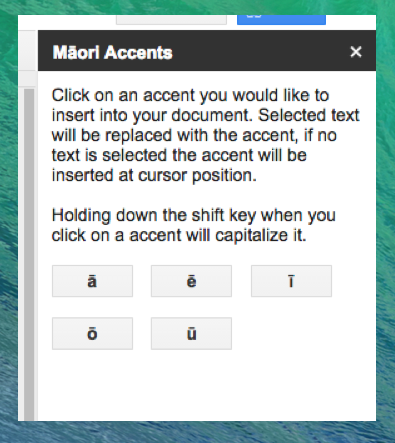 I have not been able to contribute much to Connected Educator Month because of other work commitments but I think that this is what being connected is all about.

I am so impressed with Daniel’s responsiveness I donated to help him along and encourage young developers like him.